Council offices, libraries and recreation facilities will close on Monday 26 September as part of the government's recent announcement to mark the passing of Her Majesty Queen Elizabeth II with a State Memorial Service and one-off public holiday. If you need to report an urgent issue, visit our Contact Us / Fix It page.

Frida Rylev, 16, won the competition run by QLDC with her poster: Your Vote Matters! 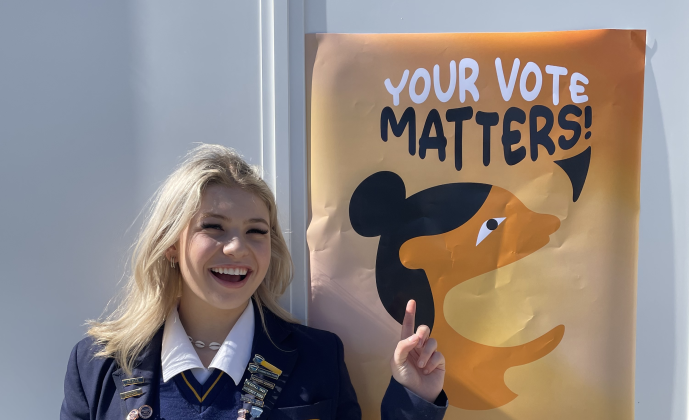 A Queenstown teenager has won a design competition encouraging young people to vote in the local election.

“When this competition came up, I thought it would be a perfect opportunity to get my name out there and try to emulate a different style of graphic design than I had been doing and to try a more professional, commercial approach,” she said.

The competition was open to young people between 15-20 years of age to design a poster that encourages voting in this year’s local election.

“It took me quite a while to come up with an idea, but I knew since this would be something encouraging young people to vote, I had to try and relate to it as well. A lot of young people are unaware of the voice they have within society, especially on a democratic level, so I wanted to do something reminding them that their voice still counts,” Frida said.

“I took inspiration for the colour scheme from previous New Zealand voting campaigns and tried to put my own twist on the word placement and imagery that I drew and designed myself.”

QLDC’s Electoral Office Jane Robertson said it was great to have young people participating in the competition and showing an interest in elections - even though Frida can’t yet vote.

“Our youth are the voters of the future. Encouraging them to learn about how our local government system works for the communities it represents, and how they can participate, and influence decisions is hugely positive. This competition was a small, creative step towards generating youth interest in the election process,” said Ms Robertson.

Frida’s design caught the judging panel’s attention for its simplicity of design, which was important given the design has been printed onto the back of a bus.

“The design is bold and eye-catching. We’re impressed with the professional level of Frida’s work,” said Ms Robertson.

Frida’s design has been published on the back of a public bus, shared on social media and with local and national media, printed in large posters, and will be published in QLDC’s magazine Scuttlebutt.

Voting is currently open and closes Saturday 8 October at noon.